BIRMINGHAM, AL — It’s just before 2 p.m., the end of a workday that began at 5:30 a.m. for Dolester Miles, a self-taught pastry chef who, in May, was named the best in the nation by the James Beard Foundation. Wearing a spotless white bib apron over an equally spotless chef coat, with sleeves neatly rolled above her elbows, she stands in the compact kitchen of Bottega restaurant, deftly smoothing a thin layer of whipped cream frosting on a towering, three-layer coconut pecan cake.

Dolester Miles brushes egg wash onto an apple crostata in the kitchen of Bottega. (Rob Culpepper/For The Washington Post)

She flicks her offset spatula all the way around where the top and sides meet, employing rote precision born of three decades of experience to create a crisp, perfect edge. After she coats the cake with toasted coconut, it’s ready to be picked up by a patron waiting to pay $80 for it, plus tax. Anyone who has eaten that cake, which yields 14 slices, knows two things: that it’s worth every penny, and that the last crumb of it will be snatched up and savored like the last word of a great novel.

Miles, who goes by Dol, oversees a staff of four and the baking production of the four restaurants owned by chef Frank Stitt and his wife, Pardis, including their fine-dining flagship, Highlands Bar & Grill.

In addition to the coconut pecan cake, Miles’s fruit cobblers with flaky biscuit tops, her lemon tarts with swirls of caramelized meringue and her silken panna cottas are legendary in Birmingham. She handles with alacrity the array of Southern, Italian and French favorites found on the menus of the Stitts’ restaurants. A prep list 44 items long on the Thursday before Labor Day revealed the breadth of her work. Production included: chocolate pots de crème; citrus shortbreads; hamburger buns; pizza dough; buttermilk tarts; batches of ice creams, sauces, fig jam and frangipane (an almond-based tart filling); polenta cakes; and crème caramels.

Miles was one of 20 semifinalists in the Beard Foundation’s Outstanding Pastry Chef category for five years running, and among its five finalists for the past three years. The awards gala at Chicago’s Lyric Opera House was a celebratory one for the Stitts, too. After being nominated for 10 consecutive years as the nation’s Outstanding Restaurant, Highlands won. The first time Miles was a finalist, she couldn’t believe it.

“I never really understood how the Beard thing goes, how you get nominated and all of that and, you know, from being down South, from Alabama! Most of them be from New York, California, Chicago — all those big places,” she said. “But to be nominated from all the way down here? That was amazing.” (Miles’s fellow 2018 finalists were from New Orleans, Minneapolis, Chicago and Los Angeles.)

Miles, 61, was born in Victoria, Tex., in 1956, but grew up with four older siblings in Bessemer, a small town 15 miles southwest of Birmingham. Her mother, Cora Mae, sold insurance; her father, Jim, who had been a mechanic in the Air Force, did custodial work for the University of Alabama at Birmingham. Miles’s parents, now deceased, kept a garden and were both good cooks. Miles caught the baking bug from her mother and aunt, Queen Esther Harris, who were known in the family for their baking prowess. Her mother’s favorite cake, a brown-sugar pound cake, was the first thing Miles made on her own.

Like many restaurant workers, Miles happened into the business. In high school, she worked as a line cook at a Mexican restaurant. She tried her hand at computer science studies for a couple of years at Alabama Agricultural and Mechanical University in Huntsville and Lawson State Community College in Birmingham but wasn’t into it. In 1982, her path and Frank Stitt’s crossed when he opened Highlands.

“My sister Diane was job hunting, and that’s how we got started with Frank,” Miles said. “He was a great up-and-coming chef who was opening this place in Southside, so that seemed like the place to be. I didn’t have much experience — we learned as we went along.”

First, she worked the garde-manger (pantry) station, making vinaigrettes, salads and appetizers and preparing a couple of the desserts. In a phone interview, Stitt explained how that morphed into a baking position. “We were doing biscuits and corn bread, and one thing led to another pretty organically,” he said. “She really enjoyed that part of the kitchen, so I would say, ‘Okay, it’s strawberry season, so let’s make a cobbler or a tart.’ I’d lay out a framework for a dessert, and she would implement it. That’s pretty much how it’s been, a collaborative process of me sharing my favorite desserts, and Dol being able to facilitate them with a level of care and love and finesse.”

Miles concurred. “Frank does a lot of traveling, and he’ll come in and tell us about something he’s had or read about, and then we try to produce what he’s thinking in his mind and make it our own,” she said. One example is a layer cake filled with zabaglione (a foamy egg-based custard sauce flavored with marsala wine) and topped with meringue, which Stitt had tasted at Harry’s Bar in Venice, in 1984. Miles took that inspiration and put it into action.

In 1988 when Stitt opened Bottega, his second restaurant, Miles officially became his pastry chef. By 2004, she was responsible for four restaurants, including the casual Bottega Cafe, which opened in 1990, and Chez FonFon, a French bistro the Stitts opened in 2000. “I knew Frank wanted to do the baking for all the restaurants out of Bottega, so I asked him if I could do it, and he gave me the chance,” she said. “I must have done okay, because I’m still here.”

Since she was diagnosed with Type 2 diabetes 10 years ago and takes Metformin for it, Miles has been judicious about indulging in her own or any other baked goods.

Her doctor “tried to put me on this diet,” she said. “The things I couldn’t eat were all the things I was eating. They said to give up sweets and drinks, and you could eat some fruit, like half a banana. Or eat six grapes. Oh my God, who can eat six grapes? And no salt, either. It was a life-changing thing.”

These days, she eats only an occasional swipe of dessert. “I didn’t eat sweets until I found out I was diabetic, and that’s when I really, really wanted them,” she lamented. “Oh, I could just taste them!”

Especially when discussing her Beard win, Miles’s shyness and humility shine through. “I never dreamed they would call my name,” she said. “To win, it’s a feeling that I can’t even explain. It sucked all the air out of the room. Frank said, ‘Get up, they called your name!’ and I said, ‘Are you serious?’ It was amazing. I still think about it and cry.”

Stitt called it “an incredible accomplishment of a life’s work.”

“To see tears of joy from this woman who is a quiet, somewhat shy individual, but who has so much care and love in her soul,” he said. “Obviously, it’s wonderful for a Southern woman to be recognized, an African American woman to be recognized. It’s a lifetime of work and dedication to pursuing quality and excellence.”

Miles’s win has been rewarding, literally. “People are coming from all over,” Stitt said. “When they see the pastry chef has won that award, they’re not leaving without tasting those desserts.” Miles’s team now makes 60 coconut cakes a week, instead of 30. Some restaurateurs are happy if 40 percent of diners order dessert, but at the Stitts’ places, that percentage is now closer to 70.

But the accolades haven’t gone to Miles’s head. “People took the time out of their day to write me letters,” she said. “So many letters and so many flowers. Wine, bourbon — all these things to congratulate me. I never had that before. It’s been overwhelming, I must say.”

This 11-Year Old Has Helped 20,000 Homeless People By Giving Them “Blessing Bags” 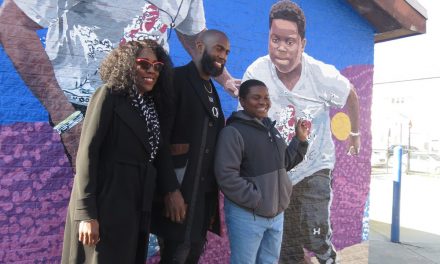 Malcolm Jenkins: Beyond The Blitz and Impacting The Community