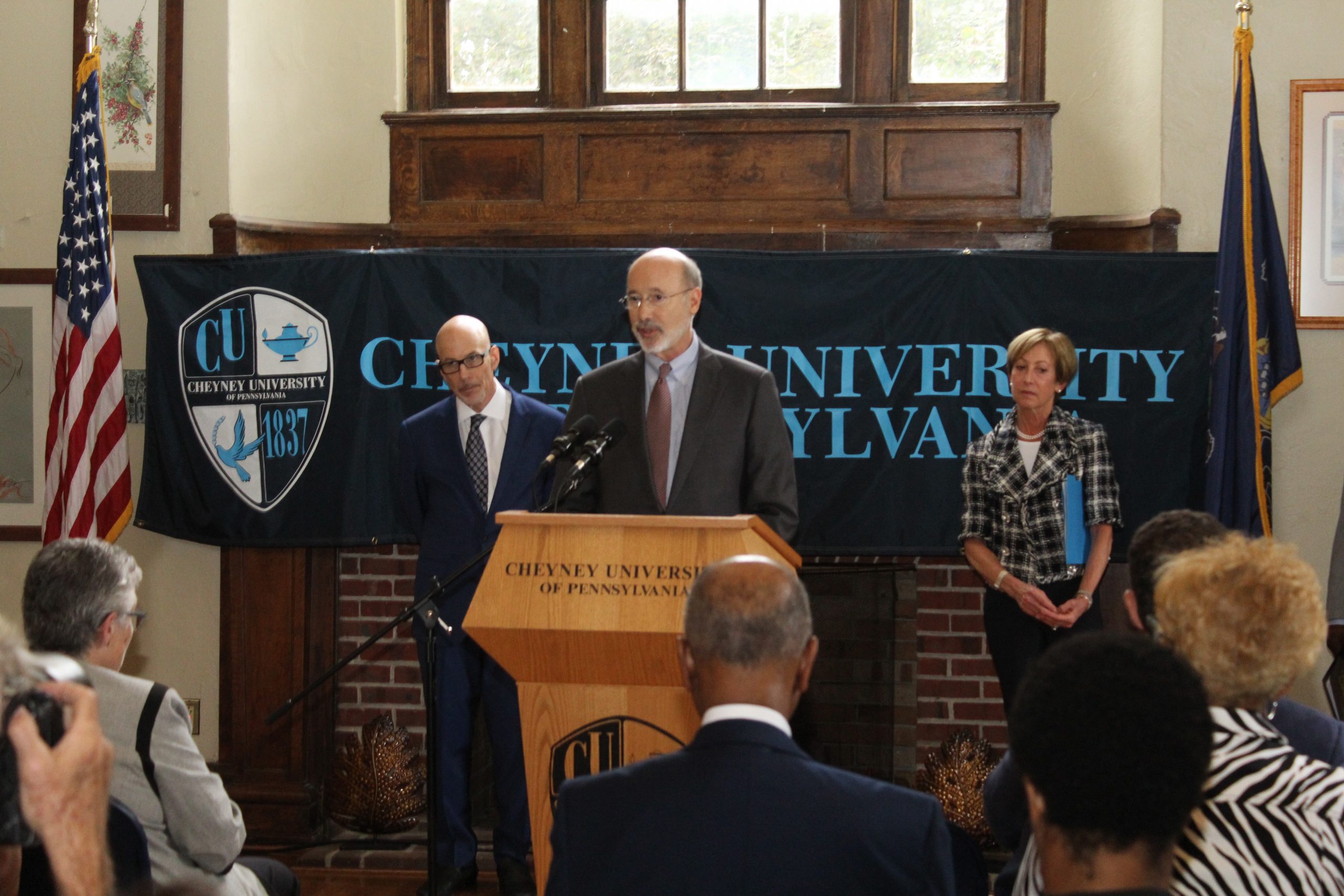 Cheyney, PA – At an on campus reception and press conference Tuesday July 31, Cheyney University President Aaron Walton, Pennsylvania Governor Tom Wolf, Cynthia D. Shapira the Chair of the Pennsylvania State System of Higher Education Board of Govenors, Dr. Stephen K. Klasko President and CEO of Thomas Jefferson University and Jefferson Health and Charles S. Smith the CEO and Chairman of Epcot Crenshaw Corporation issued a joint announcement heralding the launching of the Cheyney University Institute for Contemporary African American Experience. This new initiative is the outgrowth of a special task force convened in 2017 by the Pennsylvania PASSHE Board of Governors to formulate recommendations for a new model to resurrect and rebrand Cheyney University, put it on a path towards innovative pedagogical methodologies, modern degree programs offering a wider range of career opportunities and possibilities. The institute is charged with creating an applied research school focusing on the critical study and impact of pressing issues on: race, ethnicity, social-economic diversity as they affect national and international policy.

Mrs. Shapira welcomed the Council of Trustees, faculty, alumni, elected officials and the media and shared the history and goals of the Cheyney University Task Force. She introduced Pennsylvania Governor Tom Wolf, President Walton and the major principles that are embarking on a new partnership to redesign and fashion a new model that will transform Cheyney University into an incubator for academic excellence, social change and serve as a template for the PASSHE system. “This will serve as a template for PASSHE but isn’t it exciting that this is taking place at the very first institution of higher learning for African-Americans.”

Governor Wolf reiterated his goal to make education affordable, relevant and a springboard for a more prosperous state, national and international economy. The governor has been extremely instrumental in saving Cheyney by securing additional funding for PASSHE as well as budgeting additional funds for Cheyney not merely to help it survive but so it thrives and reemerges as an invigorated institution serving the commonwealth and world.

The partnerships with Thomas Jefferson University, Jefferson Health and Epcot Crenshaw will provide state of the art laboratories, data collection, and research and internship opportunities in emerging ecological technologies, healthcare and the health sciences. Gov. Wolf stated, “As governor two of my top priorities have been schools that teach and jobs that pay. Programs like this new initiative and the training Cheyney students will receive really play to these two goals, because we need to make sure that everybody in Pennsylvania, everybody gets a good education and a good start in their career.”

Dr. Stephen K. Klasko the President and CEO of Thomas Jefferson University and Jefferson Health stressed this relationship is not a hand out; it is a partnership that he is pleased to be a part of. “This is billed as a new day for Cheyney but it is actually more than that. I believe it is a new day for creative partnerships among academic entities in the state of Pennsylvania… So the most important message for all of you here, if you are a student, if you are an accreditor, it you are an alumnus, the most important message today is, Cheyney is here to stay.”

Charles S. Smith the CEO and Chairman of Epcot Crenshaw Corporation stated his company has been involved with the Cheyney University aquaponics program for ten years. He revealed Epcot Crenshaw is stepping up their involvement and increasing their investment, expanding the program to include sustainable agriculture as well as aquaponics. He mentioned the dire need to provide sustainable food sources, wiser use of natural resources and decreasing the waste and harmful effects on the ecosystem. Partnering with Cheyney will offer students the opportunity to become involved in cutting edge research that will have a profound impact of the ecology and future of the planet.